Projects made by us: 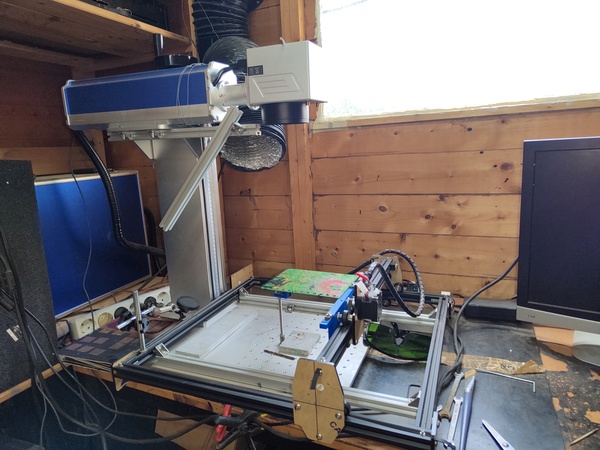 Project where we developed an artificial vision system together with an automated movement system for Ytterbium Fiber laser machine. With this system you can automate the lasing (drawing, marking, engraving,cutting or drilling) of large surfaces, with great precision. The system is composed of the following elements:

Smart camera using a smartphone for which we developed artificial vision software for calibration and compensation of projection distortions in real time. Computer controlled XY table and gcode protocol Software that takes control of the laser to be used automatically without the need for an operator (EzCad). Director software that controls the rest of the elements to automate the entire process. The system communicates through microservices.

Project developed for the robotics company Ebotlution that consisted of the design and manufacture of a portable device with a touchscreen to perform the control functions of autonomous robotic vehicles and drones whose mission is to locate anti-personnel mines. The device was also designed to be able to view the robots’ cameras in real time.
The designed hardware has a capacitive touch screen, two high-resolution analog joysticks, RF analog video receiver, transmitter/receiver for telemetry with robots, li-ion batteries with integrated charger, vibration motors, buttons and switches, USB for connection from other devices, etc.
The system’s architecture is based on a two-core ARM AllWinner SoC, a Linux kernel for which the drivers of all the elements were developed, and an embedded Qt application.

Project consisting of the design and manufacture of a particle accelerator reactor consisting of a high vacuum chamber, an electron trap using a magnetron, a rotary vacuum pump and an oil diffusion pump.

This reactor can metalize any sample . The reactor has been manufactured entirely in-house, as well as the electronics that consist of pirani vacuum sensors, vacuum pump controllers, gas injection control, and plasma intensity management to control material deposition.

Project consisting of the development and research of the manufacturing system for multilayer PCBs, with metallized holes and HDI technology with microvias.

To achieve this project, it was necessary to develop and manufacture all the necessary hardware, software and IP to cover all the necessary stages in the manufacture of a PCB, such as the creation of very high resolution images in photosensitive materials, automatic drilling, metallization , electrodeposition, chemical displacement finishing baths, etc.

This system allowed the creation of the pcbya company , where prototype manufacturing services are still offered. This technology allows to create very advanced prototypes in the same day.


Development of PCI board to interconnect the PC with external machinery

This board consists of a PCB with a Xilinx FPGA with a PCI connector to be attached to a PC computer. The PCI logic is programmed on the same FPGA. This board connected to a PC forms a formidable tandem since it unites the power of the PC processor with the flexibility provided by the FPGA’s programmable electronics, linked by the 33 Mhz/32-bit PCI bus. We have developed the drivers for linux to control it easily, and we currently use it in most projects such as CNC controller, motor controller by computer, and countless functions where a computer alone cannot reach the goal requirements.

Project consisting of making a controller capable of moving four mobile structures that are used as a giant projection screen by computer.

]The setup is done with any computer by connecting the controller to the PC via usb, with the help of a software we have developed for the PC computer. The app also notifies the status of the doors in real time and offers a multitude of options.

The controller contains a SOCAPEX power output connector. This board has been developed with an ARM Cortex M3 microcontroller, along with a power stage for the four piston motors that move the screens. All the software, the electronics and the manufacture of the pcb’s are self-developed.

Project consisting in reborning a Lagun milling machine transforming it into an automatic 3-axis CNC milling machine. The CNC is controlled by a computer with LinuxCNC program and can make any part modeled with G-Code. The retrofit has been done with the best possible technology for this type of project, with Brushless servo motors and high resolution optical encoders. The machine is controlled by a low cost computer thanks to the developed PCI + FPGA board.


Development of an inkjet printer capable of printing on any surface, with automatic calibration assisted by cameras

Project consisting of mechanically and electronically modifying an inkjet printer with a piezoelectric head (usually EPSON printers), so that it can print on any type of surface.

We have also developed a real-time vision system based on two webcams that allows the computer to detect the orientation of the surface and modify the impression so that it is aligned with a precision greater than 1 thousandth of an inch (0.025 millimeters).

This printer can print on clothing or on any type of surface, including non-porous materials such as glass, metals or plastics thanks to a special VOC ink also created in house. .

Project consisting of the creation of a pulsed power supply to carry out galvanic baths.

This power supply is much more advanced than the classic power supply used in this industrial sector, since it is capable of supplying large amounts of current in the form of positive and negative pulses, with the frequency and cadences that are configured by means of a programming software we also developed.

This technology is based in Reverse Pulse Plating. The source consists of an FPGA controlled PCI board and a power module.